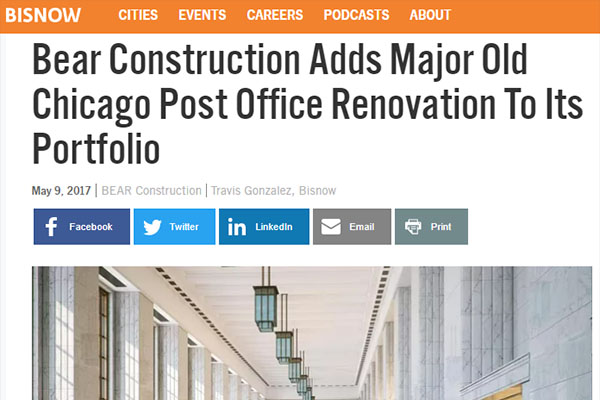 A rendering of the completed lobby renovations at the old Chicago post office
The $500M renovation of the old Chicago post office began this year, with 2017 and 2018 dedicated to repairing the landmark’s façade and interior infrastructure, the Chicago Tribune reports. Under the design influence of architecture firm Gensler, the 2.5M SF Art Deco property will become a premier riverside destination after years of decay and several fires.

To help transform the vacant building into a mix of offices, cafés and a multi-acre rooftop park, developer The 601W Cos. turned to a Chicago-based general contractor, Bear Construction Co.

The old Chicago post office started as a brick-side mail terminal building in 1922. Expansion in 1931 led to its current nine-story height and ornate lobby, which is on the National Register of Historic Places. Bear is returning the public space to its original 1931 configuration, which includes refurbishing and retrofitting the historic light fixtures, bronze entry doors, marble walls and floors and plaster features.

Delivery on the lobby is expected this summer.

The entire rehabilitation project will take several years to complete and create roughly 12,000 jobs, according to the Chicago Tribune. Bear plans to have the space ready to start tenant build-outs in 2018.

“The post office represents one of our biggest projects yet, and it’s the most time-consuming,” Bear Construction senior vice president Dennis Hill said. “Maintaining client relationships throughout the process has been a top priority.”

Rather than stretch employees’ time thin, Bear planned ahead by staffing the construction site with a combination of key Bear project executives and newly hired industry veterans.

“We knew going into the project that we needed to keep our project managers working with their existing clients, servicing them ‘business as usual,’ and we’re doing just that,” Bear Construction executive vice president Scott Kurinsky said.

Bear is taking on more challenging projects, while ensuring it does not forget the clients who have helped it grow and build its reputation.

“This is the most exciting period in Bear’s 34 years in business,” Bear Construction CEO George Wienold said. “We’re proud that we’re able to be a part of this historic journey, and thrilled that we can take our existing clients along for the ride.”