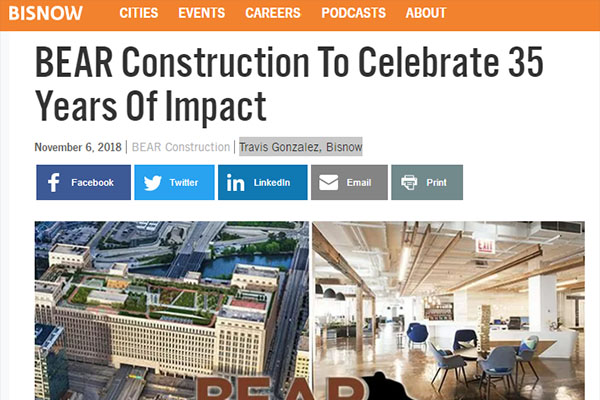 Successful commercial real estate projects are defined by partnerships and trust. From the initial space plans through the completion of a punch list, the relationship between developers and construction professionals can make the difference between a high-quality space and one that fails to reach its full potential.

BEAR Construction, which will celebrate its 35th anniversary next July, has spent the past three decades committed to fostering these relationships. BEAR grew its book of business by balancing technical expertise with a dedicated, trustworthy culture for its growing roster of clients. That focus has paid off, as BEAR has seen its annual revenues approach $300M in recent years. Its number of full-time construction experts has surpassed 225, including over 120 tradespersons on staff.

At its core, BEAR is an Illinois-based family business headquartered in Rolling Meadows. The Wienold brothers founded the firm in 1984, leveraging their carpentry and commercial construction experience to work with local commercial real estate clients. After focusing on smaller tenant and retail projects, the firm later expanded its project scope to include larger developments. BEAR built its early reputation as a respected building and landlord general contractor, and has since transformed into a firm that can navigate interiors projects of any size, in addition to medical, industrial and new construction projects.

One project highlight was an extensive renovation of Rolling Meadows’ city hall in 2006, which modernized the 1970s building and made it ADA-compliant and more user-friendly, Business Messenger reports. Most recently, BEAR was chosen as the primary contractor for the $500M renovation of Chicago’s Old Main Post Office. Construction began in 2016 to transform the nearly 3M SF abandoned building into a mixed-use office development featuring over 2M SF of tenant space, dining and numerous tenant amenities that include an expansive rooftop park.

The team at BEAR built on prior experience with historic renovations to restore the property’s two-story, 1930s Art Deco lobby. BEAR is currently nearing completion on the complete replacement of the building’s mechanical, electrical and plumbing systems, as well as updates to stairwells, elevators and the exterior facade.

Beyond this major project, BEAR still caters to its core business in interiors, healthcare, industrial and new construction.

“We want our existing clients to know that BEAR continues to value their work as much as we did at any point in our history,” BEAR Construction Executive Vice President Scott Kurinsky said. “We’ve assembled an incredible team of people to continue to serve our clientele while we grow.”

The firm’s ability to manage these projects and its overall growth stems from its leadership. BEAR’s owners are based in its Rolling Meadows facility, which is the home base for most of its executive team, as well as the accounting, estimating, marketing, management and business development teams. The site also features a distribution center where it warehouses and ships specialized construction materials to project sites.

To further accommodate a growing regional network of clients, BEAR has offices in downtown Chicago and Champaign and Bradley, Illinois, as well as Milwaukee. From these strategic locations, BEAR continues to expand its reach into new markets, including senior living facilities, multifamily complexes, industrial properties and university campuses.

The company also continues to work on numerous healthcare projects in more than 40 local hospitals within these regions each year.

“The biggest risk a company can take is not taking any risks,” BEAR Construction CEO George Wienold said. “BEAR wouldn’t be where we are today without some of the bold steps we’ve taken, which were often daunting at the time.”

Despite its growth, BEAR remains committed to a family atmosphere, demanding the highest levels of customer service, professionalism and integrity across all of its projects. And when BEAR is not working with clients, the team is giving back to the community by donating time, effort and money to numerous foundations and charities.

“We’ve found that aside from being just the right thing to do, being a part of various charities builds a bond within our company that makes us even stronger as an organization, and also strengthens the communities around us,” BEAR Construction Senior Vice President Dennis Hill said.

Whether working on a small office renovation or a multimillion-dollar new construction project, BEAR understands that every project is the most important one to that client, and treats every client with the same level of attention and care as when it was founded in 1984.