Coping with Rising Costs: HOW INFLATION IS AFFECTING BUSINESS 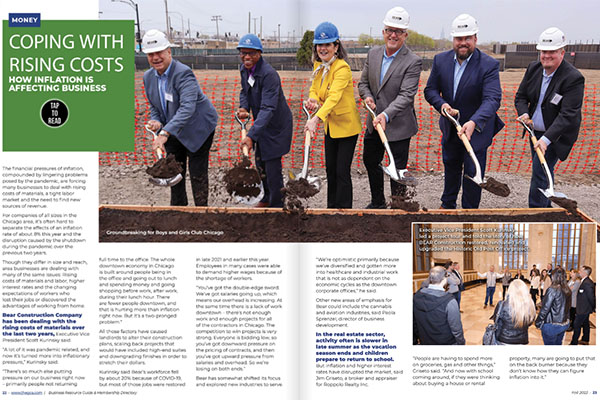 HOW INFLATION IS AFFECTING BUSINESS

The financial pressures of inflation, compounded by lingering problems posed by the pandemic, are forcing many businesses to deal with rising costs of materials, a tight labor market and the need to find new sources of revenue.

For companies of all sizes in the Chicago area, it’s often hard to separate the effects of an inflation rate of about 8% this year and the disruption caused by the shutdown during the pandemic over the previous two years.

Though they differ in size and reach, area businesses are dealing with many of the same issues: Rising costs of materials and labor, higher interest rates and the changing expectations of workers who lost their jobs or discovered the advantages of working from home.

Bear Construction Company has been dealing with the rising costs of materials over the last two years, Executive Vice President Scott Kurinsky said.

“A lot of it was pandemic related, and now it’s turned more into inflationary pressure,” Kurinsky said.

“There’s so much else putting pressure on our business right now – primarily people not returning full time to the office. The whole downtown economy in Chicago is built around people being in the office and going out to lunch and spending money and going shopping before work, after work, during their lunch hour. There are fewer people downtown, and that is hurting more than inflation right now. But it’s a two-pronged problem.”

All those factors have caused landlords to alter their construction plans, scaling back projects that would have included high-end suites and downgrading finishes in order to stretch their dollars.

Kurinsky said Bear’s workforce fell by about 20% because of COVID-19, but most of those jobs were restored in late 2021 and earlier this year. Employees in many cases were able to demand higher wages because of the shortage of workers.

“You’ve got the double-edge sword. We’ve got salaries going up, which means our overhead is increasing. At the same time there is a lack of work downtown – there’s not enough work and enough projects for all of the contractors in Chicago. The competition to win projects is very strong. Everyone is bidding low, so you’ve got downward pressure on the pricing of contracts, and then you’ve got upward pressure from salaries and overhead. So we’re losing on both ends.”

Bear has somewhat shifted its focus and explored new industries to serve.

“We’re optimistic primarily because we’ve diversified and gotten more into healthcare and industrial work that is not as dependent on the economic cycles as the downtown corporate offices,” he said.

Other new areas of emphasis for Bear could include the cannabis and aviation industries, said Paola Sprenzel, director of business development.