More Than Checking A Box: A Chicago Contractor Reaches Out To The Community 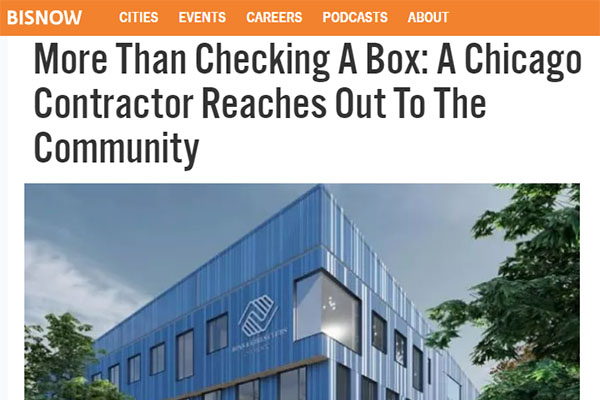 The Boys & Girls Clubs of Chicago, a generations-old Chicago institution that provides young people with much-needed support and resources, is getting its first new facility in nearly 30 years. Its construction, meanwhile, is providing training and employment opportunities for residents of the building’s underserved neighborhood.

Vacant for decades, the 4400 block of West Chicago Avenue today is abuzz with subcontractors transforming the property into an asset for the West Side community. In addition to a new 26.7K SF building for BGCC, the 34-acre site also will be home to a new training campus for the Chicago police and fire departments as well as two new restaurants.

“This is the first ground-up new construction building for BGCC in several decades,” said Katherine Darnstadt, founding principal of Latent Design, architect of the facility. “It signals both the strength of the organization and the depth of its commitment to longevity in Chicago communities.”

The BGCC isn’t alone in its commitment to the new building’s success. BEAR Construction, the general contractor on the BGCC project, has made it a priority to work with the club to ensure the workforce on-site is inclusive and representative of the local community.

BEAR Senior Vice President Dennis Hill said the company wants to exceed minority hiring requirements on the job. But he admitted it is a challenge considering the Chicago construction market is currently “very, very busy,” as many firms are already booked solid with work through the summer.

Hill explained that BEAR and BGCC are participating in and hosting community hiring workshops and soliciting proposals from more than 100 minority- or women-owned firms, in addition to trying to source building materials from local businesses.

“The BEAR and BGCC team is reaching out to the people who live in the community to provide those interested with the opportunity to work on the site as a union tradesperson or apply for an apprenticeship,” Hill said. “We’re also searching for contractors that are based in the community.”

Cody Stambaugh, BEAR project manager, said his firm’s goal is to “not just check a box” in terms of minority hiring goals. Instead, the intent is to help provide local businesses with opportunities and build career paths so neighborhood residents are better positioned to work on future projects too. BEAR has asked every firm bidding on the project that isn’t minority-owned to partner with a minority firm, he added.

Another challenge BEAR faces is the BGCC’s location next to the police and fire academy, a completely separate project that has received pushback from members of the community who object to its presence. Fortunately, BEAR has proven to be adept at navigating such challenges, said Michael Crowley, BGCC chief of staff.

“They approach everything with an inclusive, strategic and solution-focused mindset, and communication channels are always open,” Crowley said. “It’s this transparency plus a commitment to outreach and engagement that gives us confidence.”

BEAR is also facing a logistical challenge. Between the BGCC building, police and fire academy and nearby restaurants, quite a number of firms are working in close quarters, requiring a high level of coordination.

“It’s a very, very active site,” Stambaugh said. “There’s about five or six different entities involved with the several phases of the work and, among those individual groups, there’s at least 30 subcontractors involved.”

The BGCC portion of construction broke ground in April, and the facility is expected to be finished and ready to offer educational, mentoring, athletic and other services to neighborhood children by early 2023.

The building may be focused on future generations of Chicago residents, but Stambaugh said BEAR is following some old-school best practices to maintain momentum on the project.

“We are focused on being considerate and ensuring everybody understands that we’re all working toward the same end goal,” Stambaugh said. “It’s a matter of doing whatever we can to get our project done, but to help everybody else get their work done at the same time.”

Stambaugh said this involves ongoing communication among all parties involved.

“It’s a matter of making sure everyone’s on the same page,” he said.

That requires a lot of meetings, but the effort is well worth it considering the impact the BGCC facility will have on the area, according to Stambaugh.

“This will be a great building that will stand the test of time,” he said. “And it will be great for the neighborhood.”